Following the pitch presented by project promoters, three types of prizes were awarded for a total amount of €194,000. A collective prize was awarded by 1% in each of the 7 environmental themes, and “Most Favourite” prizes were awarded by the Grands Mécènes (Major Patrons) in the form of donation pledges as well as other prizes. 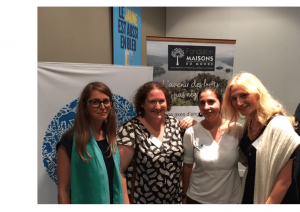 Through the participation of Fabienne Morgaut, Director and Lisa Mimoun, Project Coordinator, the Maisons du Monde Foundation contributed to the award of collective prizes. It also awarded its “Most Favourite” and “Special encouragement” prizes.

HUG BACK, the association promoting reforestation and artistic creation received the “Most Favourite” award from the Foundation and a prize of €10,000 for its project “Connectés”.

Promoted by the film-maker Jane Shinasi, HUG BACK focuses on the production of films to raise environmental awareness. Through Naziha Mestaoui, “Connectés” shows the amazing ability of trees to communicate among them thanks to the work of the Linv laboratory in Florence. It follows Naziha in Brazil, in the Amazon, meeting the Huni Kuin and Ashaninkas communities who take their inspiration from nature from a technical and philosophical point of view, and learning about their relationship with nature.

For more information on the project.

The REFEDD, Réseau Français des Etudiants pour le Développement Durable (French students’ association for sustainable development), won the “Special encouragement” award from the Foundation, and a prize of €3,000 for its activities in connection with the European Sustainable Development Week.

REFEDD brings together 120 student associations committed to sustainable development. Its objectives: unite, train, mobilise students collectively or individually and make their voice heard by the government and universities. The support from the Maisons du Monde Foundation will finance local activities in connection with the student sustainable development week.

For more information on the project.

Learn about the associations supported in the press release from 1% for the planet and on the website https://rap.onepercentfortheplanet.fr/les-projets/